There are many similarities between squash and racquetball, but quite a few differences, too, such as the size of the racquet, the ball, and the court the games are played on. If you’re thinking about taking up one game or the other, the question is, which of the two is harder?

Squash is the harder game to master and play well. One is playing with a smaller racquet, hitting a smaller ball, and the court has more limitations regarding where the ball may be played. As a result, more skill is required to play squash than to play racquetball.

Squash dates back to the 1860s, so it is much older than racquetball, which was introduced in 1950. Before squash players begin to feel superior, let’s point out that the game evolved from one played in prisons in the 18th century. Racquetball, on the other hand, was invented by an American handball player, Joseph Sobek, who introduced a stringed racquet as a variation of handball.

If we accept that squash is the more challenging game, we need to back that up by looking at the differences between squash and racquetball and why they affect the difficulty levels of each game.

The Racquets Are Different

The Balls Are Very Different

A Racquetball Court Is Larger Than A Squash Court

The Rules Are More Complicated In Squash

There are a few more things in squash that you’re not allowed to do, so let’s check out the basic rules of each game.

In squash, the aim is to score eleven points before your opponent to win the game. The match winner is the first player who wins three games. The server serves with at least one foot in the service box by hitting the ball from his hand so that it bounces off the front wall above the service line and back into the box on the opposite side of the court. The opponent then has to return the ball before it bounces twice, and so that it remains within the side and front lines and above the tin strip. The first person to let the ball bounce twice, hit the ball outside of the lines, or fail to return it, loses the point and the other player then serves.

In racquetball, each player must reach fifteen points to win the game and must win two games to win the match. Each player must hit the ball before it bounces twice so that it hits the front wall before bouncing back for the opponent to play. There are no lines on the front or side walls to limit play, and the ceiling can also be used.

A rule common to both games is that a player must give the other player full access to the ball so that he is best able to return it. Deliberate obstruction (adjudged by the umpire) will result in the offending player losing the right to serve. An accidental obstruction will result in a let, with the point being replayed.

Squash Vs. Racquetball -Which Is The Most Strenuous?

It has been shown that a racquetball ball moves quicker than a squash ball – up to 160 mph compared to 100mph. However, despite the fact that it’s faster, its flight is more predictable. As a result, squash players expend more energy, and have to move around the court more than racquetball players.

In 30 minutes, a squash player can expend as much as 550 calories, whereas the in the same period, a racquetball player only burns about 330 calories. These figures are for experienced male players of average weight. They are lower for women and also for beginners with low skill levels. The comparisons, though, still apply.

What Is The Most Popular Game – Squash Or Racquetball?

Around the world, about 20 million people play squash on a regular basis, whereas the figure for racquetball is under 6 million. Part of the reason is that most sports clubs will have full squash facilities, whereas racquetball courts are far less prevalent.

Squash is more popular among young, energetic players because it’s a fantastic way to exercise, burn calories, and stay fit. Racquetball is kinder to the older player who might not have the same energy levels but enjoys a competitive racquet sport. (Racquetball players who compete with the high-speed purple ball may disagree strongly with that assessment!)

Both squash and racquetball are excellent sports to get low-impact aerobic exercise, improve hand-eye coordination, and burn calories. Because they are played mostly indoors, they can be enjoyed all year round, unlike tennis. But be warned – squash is harder than racquetball in every respect. 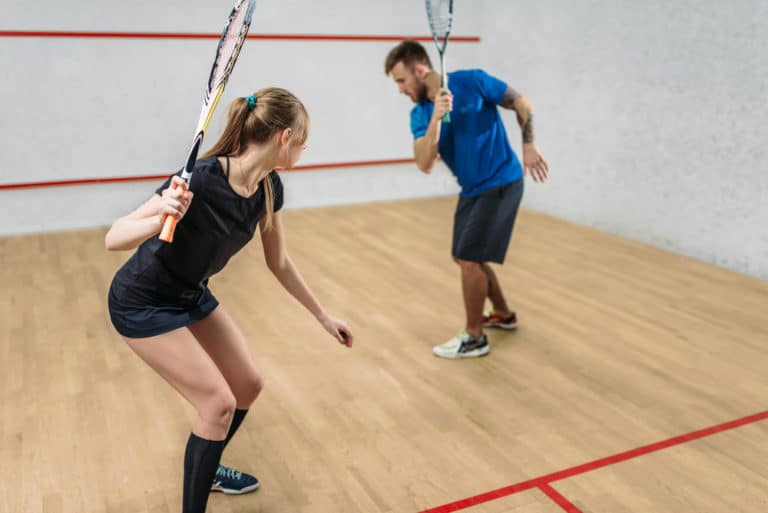 Squash is a fun sport that many love, and there are various levels at which one can play. Most players, though, even if they only… 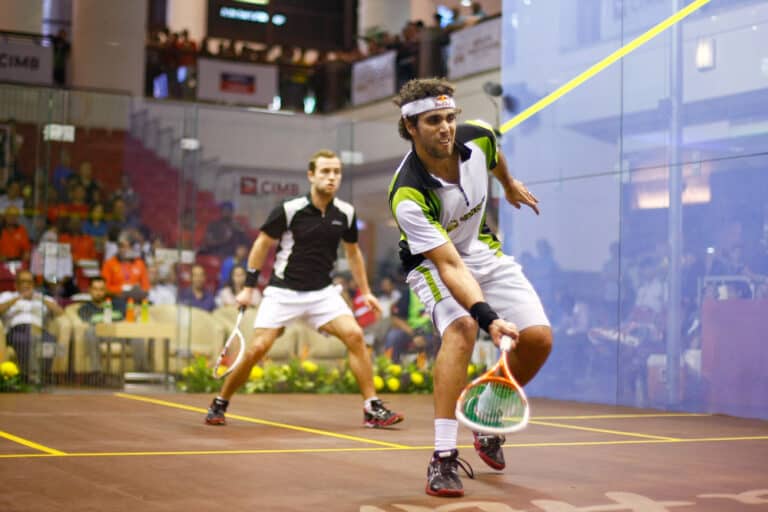 Whether you’re an experienced player or are new to squash, being hit by the ball is a common occurrence, given that people are hitting a… 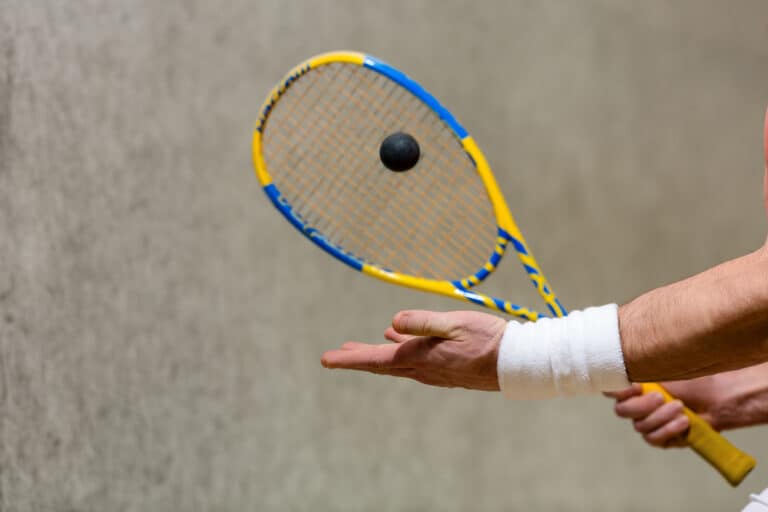 Although squash is gaining in popularity around the US, it is not quite as popular as tennis. So, whether you’re a fan of these sports… 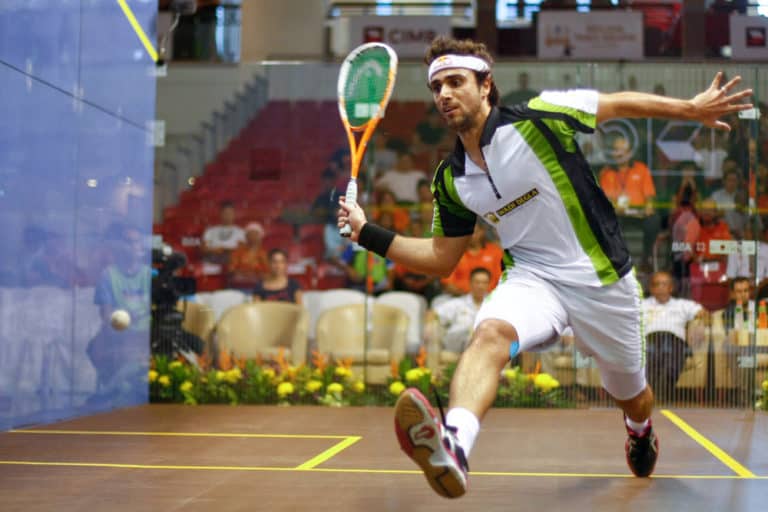 Like most sports and games, the notoriously fast-paced indoor racquet sport Squash has an extensive vocabulary of its own jargon. The Squash-specific terms and phrases… 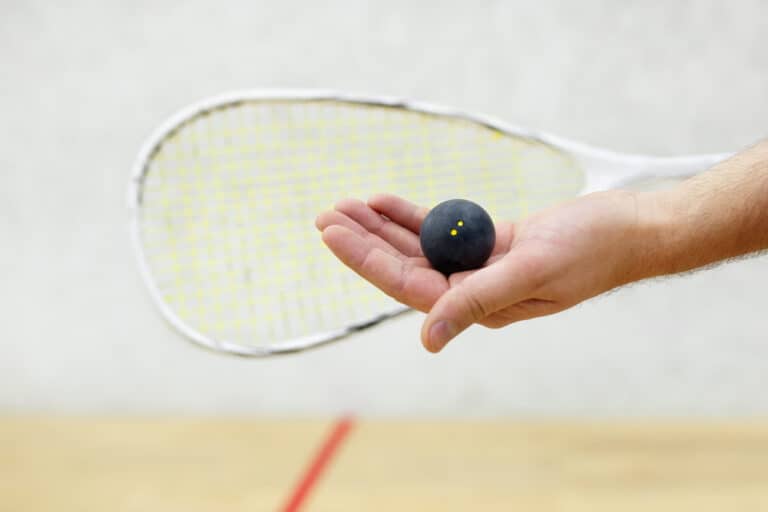 Squash is a racket sport perfect for competitive adrenaline seekers looking to work up a sweat! I play casually and competitively, and I notice that… 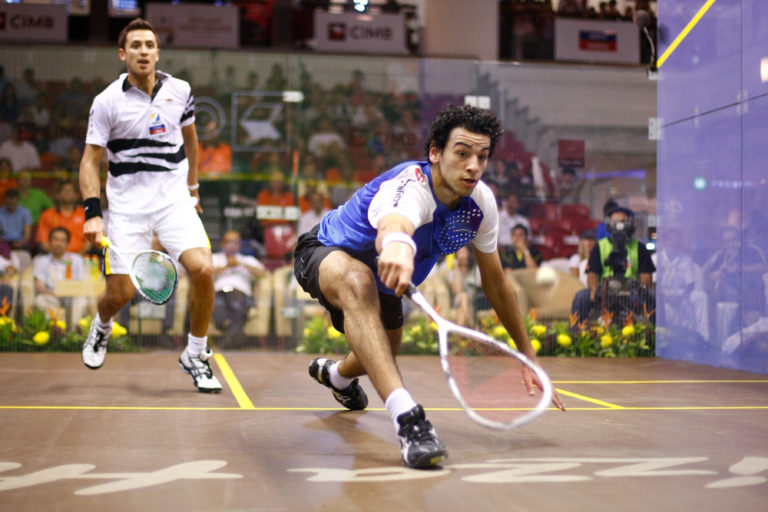 If you’d like to know a little more about squash before picking it up as an exercise or hobby, you’ve come to the right place….