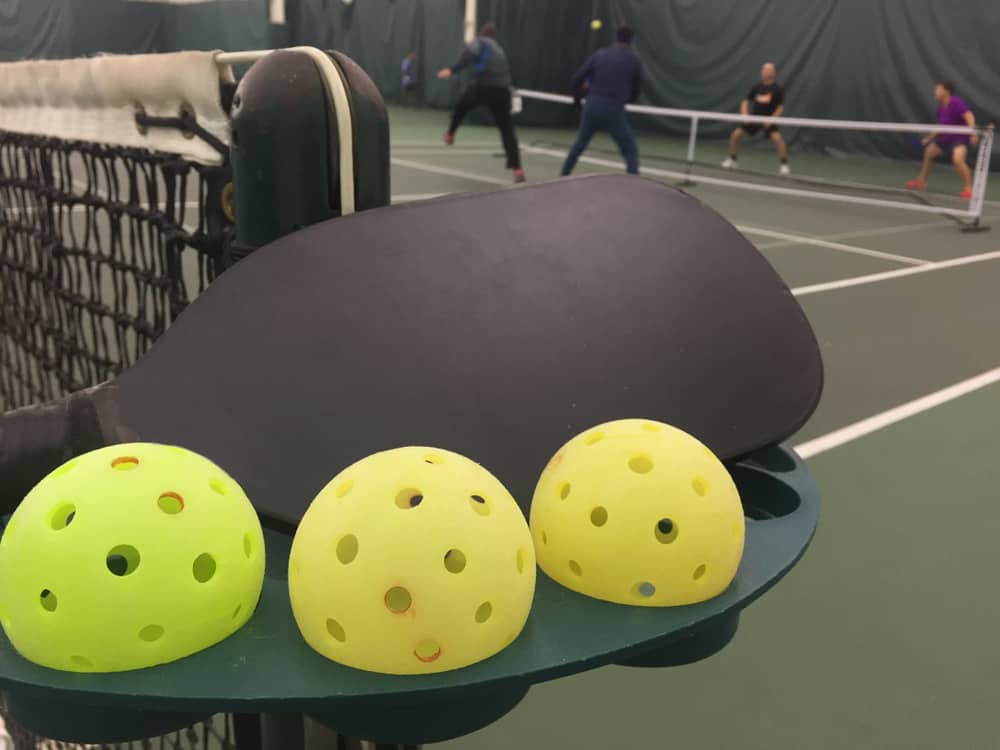 Many individuals, young and old, enjoy the sport itself, but one thing that seems to be a point of discussion is the angst over these plastic balls, either 2.87″ to 2.97″ in diameter. Additionally, the two variations have between (or usually exactly) either 26 or 40 circular holes in them. But is all the fuss valid, or can we use them interchangeably?

The brief answer is it is highly non-recommended to use outdoor pickleballs while playing indoors. This boils down to the fact that outdoor balls are far more prone to skidding on indoor surfaces and making play challenging. There are differences in designs for a reason.

Far less often will you find people using outdoor pickleballs for indoor play than you will see them using indoor balls on an outdoor court. The reason, as mentioned above, is that the outdoor balls skid and are all-around harder to play with on indoor courts. The reverse, though, is that indoor balls allow for easier control and longer rallies outdoors. So to learn the ins and outs, be sure to read on.

The Differences Between Outdoor And Indoor Pickleballs

There is no question about it; although they look remarkably similar and the weight difference is not that significant, there are definitive differences that come into play when choosing which type of ball to use to play where. Learn the differences below and then decide on which balls to use where.

One of the initial differences you will note about the outdoor ball is that it is slightly heavier than an indoor ball, and additionally, they are harder. This means that they play faster. Although you can hit these kinds harder, they lack slightly in the control department. And for these reasons, the rallies are generally shorter.

They also have much smaller holes in them, and there are far more holes, which aids them in being less affected by the wind than if you were to use an indoor ball on an outdoor court. The outdoor ball can have as many as 40 holes; this can be less, but balls with fewer holes are less prominent within play.

They are also smoother, and this is one of the primary reasons they are a challenge to use when playing indoors, as this leads to them skidding or not bouncing nicely on indoor courts. They are made both more rigid and smoother so that they will be more resilient against the outdoor elements. They also play much faster than indoor, which is usually the reverse for most sports.

One thing you will be grateful for when playing with an indoor ball instead of the outdoor ball is that if you happen to get hit with an indoor ball, they hurt far less. It is far more painful to be hit by an outdoor pickleball. Interestingly enough, they also happen to be bouncier than their indoor counterparts, which works well on outdoor courts, but not so much the indoor courts.

Outdoor pickleballs are less prone to wear and tear. However, usually in colder weather, when played with for extended periods, they will crack when they finally wear or are affected by the elements. This, too, is true in overly hot weather; if you use an indoor pickleball, though, they typically just tend to get softer and unplayable.

Bearing all of the above in mind, the outdoor ball will usually need replacing more frequently when used on an outdoor court.

Suppose you have played indoor and outdoor pickleball with the respective and recommended balls. In that case, you will have noticed that the outdoor balls, played on an outdoor court, are prone to be far louder, and this has resulted in the investment in trying to find ways of creating less noisy outdoor balls.

The top brands for outdoor pickleballs are Dura, Franklin, and Onix, all highly popular. Various brands are sanctioned for use, and if the above ones do not fit your budget, there are other pickleball options:  the Penn 40, the Tourna Strike, the Gamma Photon, and the Core.

The indoor pickleballs are softer, lighter, and not quite as bouncy as their outdoor counterparts. The holes in them are far less (usually sitting at 26 holes) than found with outdoor balls, and they are larger. All of these add to one having greater control of the ball, and with the exclusion of the elements (such as wind), one faces outdoors; the play is typically smoother, and rallies last longer.

Due to the points mentioned above, if you happen to get hit by the ball, you’ll note that it is far less painful than when using an outdoor ball. Although they are easier to control and result in more rallies than outdoor balls, they come off the paddle softer than the outdoor pickleballs. Another aspect where they differ is that indoor balls do not bounce as high as outdoor balls.

Whereas outdoor balls tend to lose their roundness, and when they are damaged, they tend to exhibit this in cracks; the indoor ball will become softer, and thus they are unplayable.

These are the reasons as to why one would be wiser to use indoor picklballs on most indoor courts than opting to go with the outdoor ball. The most popular indoor balls are Onix Fuse Indoor Balls and Gamma Sports’ Photon Indoor, or Jugs. Jugs are often favored due to their lower price tag; however, they become softer and squishy more quickly when used for prolonged periods.

Do You Need To Be Aware Of Which Balls Are Sanctioned For Pickleball?

If you are planning to play in a tournament, it would be wise to contact the organizers or look at the information they have provided regarding the type of balls used for play. There is a list of balls sanctioned by the USAPA/IFP, and you can view that here.

It would be unwise to practice with a ball that will not be used in the particular tournament in which you intend to play; instead, get yourself the specific balls that will be used and get used to them. If you do not want to enter a competition, this should not be a concern.

Keeping The Color Of The Pickleball In Mind

The most popular colors tend to be brighter and are often yellow or orange when it comes to outdoor balls. This is because they are easier to see in various outdoor lighting conditions. This changes during indoor play, where the lighting is usually consistent in hue and brightness.

The color of the floor, background (which is usually painted walls), and the type of lighting will be quite different from that of outdoor play. So although we would like it to come down purely to personal preference and taste, this is not likely to be the case.

The typical trend is that brighter colored balls are used for outdoor play, while for indoors, most will opt for darker shades of pickleballs. Yes, it may be possible that your outdoor balls are not too bright to be a deciding factor, but then you have to consider all the other points we have brought up.

Are There Times When One Should Use Outdoor Pickleballs Indoors?

One point that must be brought up, though, and this is partially contradictory to the argument of not using outdoor balls on indoor courts, but is certainly valid, is that indoor courts are built of similar materials to outdoor courts in some cases. Therefore, this means that contrary to what we have said, there are times when using an outdoor pickleball indoors will actually be a better idea.

Although we would like to assume that indoor and outdoor pickleballs are interchangeable, this is not arguably the case. Some players opt to use indoor balls on outdoor courts (especially when the wind is not a factor) as they are lighter, thus easier to control, and quieter; using outdoor balls indoors is generally not practiced or recommended. Instead, purchase indoor balls. 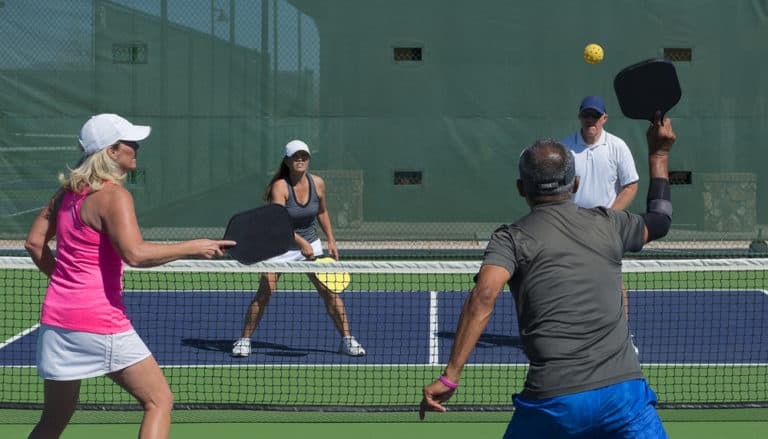 Pickleball is a sport that’s been growing in popularity at a tremendous rate. It was mostly played for fun until fairly recently; it’s become a… 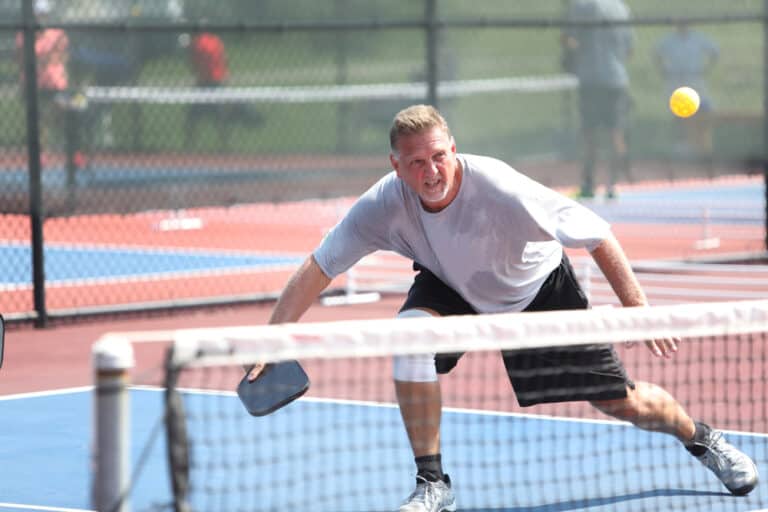 POP…POP…pop-pop…POP – The familiar sound of a pickleball game in full swing is fun and festive for the players, but it can be downright annoying… 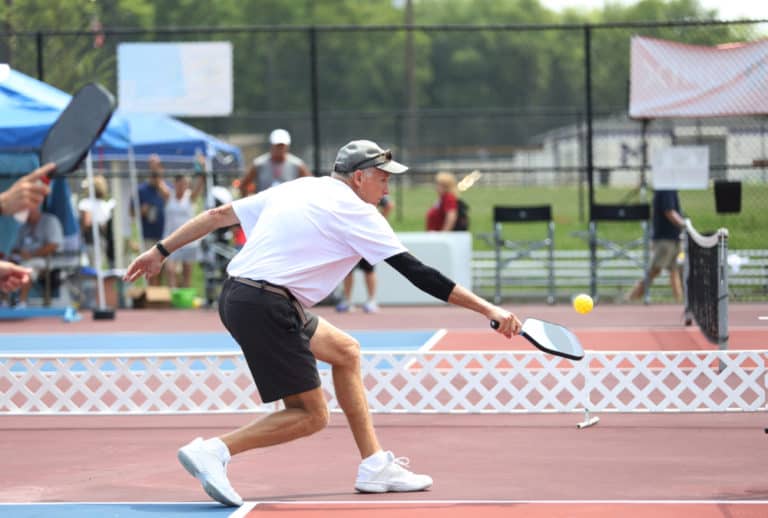 If you are a lover of pickleball who has been participating regularly, you likely know most of the basic rules of the sport. However, even… 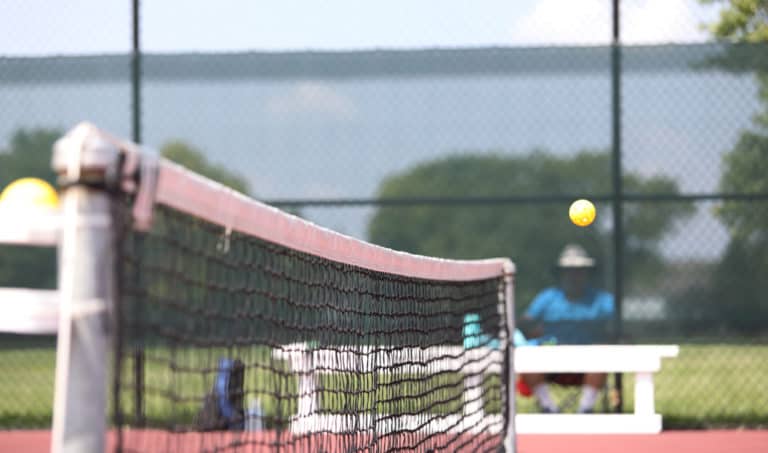 The net is a very important factor in pickleball. Like most racquet sports that feature a net, the aim is generally to get the ball… 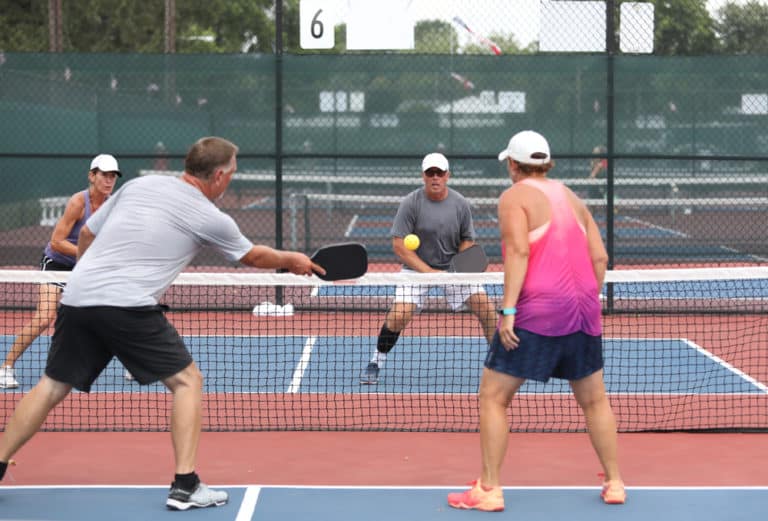 Pickleball is a very social sport for most people, but things get more serious at the tournament level. It is a game in which co-operation…